Criminal proceedings take place only when an offence is committed.

Any act or omission which is prohibited by law and is punishable by law is a crime. The punishment for such crime is decided by following procedures of criminal trial. The criminal trials in India are well established statutory, administrative and judicial framework. The whole criminal law consists of three main acts –

When the common people knew that the nature of offence is criminal. He/She either files a FIR in a local Police Station or File Complaint case in Magistrate Court in his/her jurisdiction. If you can’t get an FIR registered at a police station, then you can approach the local magistrate under CRPC 156 (3) 1973. Under this section, a magistrate is empowered to order the investigation. 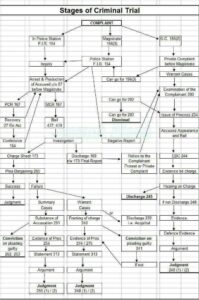 According to Section 2(x) of Code of Criminal Procedure, 1973 a warrant case is one which relates to offenses punishable with death, imprisonment for life or imprisonment for a term of seven years or more. The trial in warrant cases starts either by the filing of FIR in a police station or by filing a complaint before a magistrate. Later, if the magistrate is satisfied that the offense is punishable for more than two years, he sends the case to the sessions court for trial. The process of sending it to sessions court is called “committing it to sessions court”.

Important features of a warrant case are:

The stages of trial in warrant cases are given from Section 238 to Section 250 of the Code of Criminal Procedure, 1973.

According to Section 2(w) of Code of Criminal Procedure, 1973, Those cases in which an offense is punishable with an imprisonment of fewer than two years is a summon case. A summon case doesn’t require the method of preparing the evidence. Nevertheless, a summon case can be converted into a warrant case by the magistrate if after looking into the case he thinks that the case is not a summon case.

The different stages of criminal trial in a summon case are given from Section 251 to Section 259 of the Code of Criminal procedure.

We Help Solve Your Legal Issues

one of the best law firms in Kolkata has enviable expertise in providing
legal assistances and services and is also enriched with the experience
in successfully handling umpteenth number of cases in various forums on everyday basis.